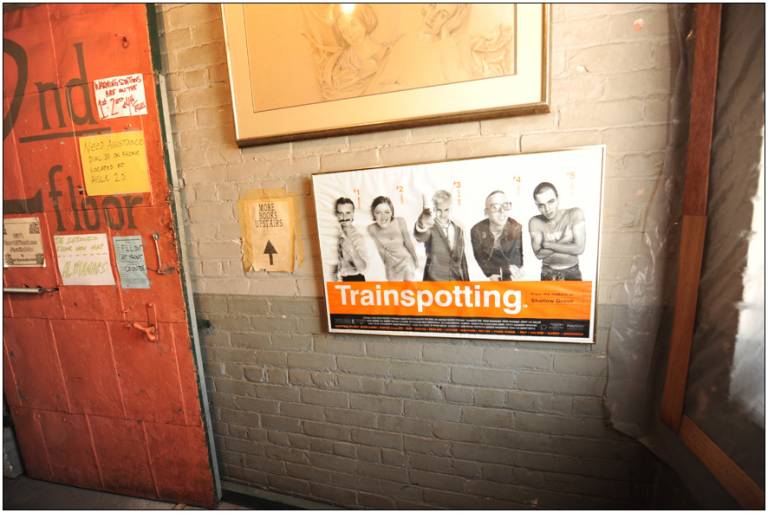 When Trainspotting first came out I was downtown Ann Arbor buying some cds with a friend.Â We were waiting to pay and standing in the longest queue.Â I was bored and gabbing on about something or other when I saw a Trainspotting advertisement and started spouting off about how I thought it was horrible to make a movie that glamorized drug use and how irresponsible it was to the youth of the day (I don’t think I was more then 20 gah has it been that long I must check my dates) anyway I was in general being obnoxious and kept going on.Â Behind us waiting in line was a guy (attractive, maybe a few years older then me, nice coat, hip haircut) he was sighing and making little annoyed sounds at me as rambled.Â Finally this poor guy says to me.Â “You know, you must not have gotten the movie because really it’s all about how horrible that life is.Â It’s a warning not to do Heroin.” and IÂ wasÂ kinda glad to have something to distract me and said something that I thought sounded smart about “how it doesn’t matter if that’s the point or not because nobody gets the point usually” I was totally full of BS, being a brat .. Finally he said, slightly irritated, “Did you even see the movie?” Which was a question I was hoping he wouldn’t ask because of course the answer was “No”, which was a generally embarrassing answer since it proved I was well, full of shit.

That’s always bugged me.. my doing that

What the heck does this have to do with process or these Friday salon posts or photography, or art.Â Seeing this poster in Kings Books the other day while shooting Ashley and Emmett reminded me of that moment.Â Which made me think…Â It’s so amazing how in the artistic processÂ we can think we know so much and then such a short time later realize there is a mountian of new learning and growth to climb, or the opposite, like in the movie itself; We can think how could we ever get over this low and then, before we know it, we’ve created something that makes us wonder where all that beauty within ourselves came from.Â It’s a real coaster sometimes.Â I like that no matter how much you know (or think you know)Â you can always learn more and no matter how low I may feel, the wheel will turn and when I look back the thing that was a struggle may have actually been the accomplishment.Â I love that.